The 2019 Copa America group stages have finished as Brazil, Uruguay and Colombia topped their respective groups, Chile, Argentina and Venezuela finishing second. These 6 teams will be joined by Peru and Paraguay in the quarterfinals after Japan missed out on goal difference.

Group A finished with Tite’s Brazil in first place, Venezuela in second, Peru in third and Bolivia in fourth to round up an exciting group. Brazil beat Peru and Bolivia but drew to Venezuela; they’ll definitely be going into the knockout stages as one of the favourites.

Although Brazil don’t have their star man in Neymar, they’ll hope young talents David Neres or Everton will be able to step up in his absence and deliver on the field. Venezuela also qualified for the knockout stages alongside third-placed Peru who will both hope they can make it past the quarterfinals. Neither team will be considered favourites, but they’ll definitely give a good performance.

In Group B, Colombia finished first, Argentina were runners up, Paraguay finished third and invitational team Qatar came last. Argentina were largely uninspiring as they only managed to register a win against Qatar, Lionel Messi has also failed to impress so far in the tournament after his only goal coming from a penalty versus Paraguay.

Uruguay topped Group C on 7 points after convincing wins over Ecuador and Chile and drawing to Japan. Their impressive striking partnership got 4 goals between them from Edinson Cavani and Luis Suarez. They’ll be going into the knockout stages believing they can win the whole tournament however they’ll need experienced players such as Diego Godin and José Giménez to step up if they are to go that one extra step.

Alexis Sanchez’ Chile side finished second in the group on 6 points after beating Ecuador and invited side Japan convincingly. Although they lost to Uruguay, they’ll definitely be a team to watch as the Copa America gets to the knockout stages. Although Japan finished third, they will not qualify for the knockout stages as they finished last in the “Ranking of third place teams” and missed out on goal difference.

Chile will definitely fancy their chances against Colombia as they wish to reach another Copa America final. Their match versus Colombia will be the closest quarterfinal of the four as they prepare for their match on June 28; Chile will need Alexis Sanchez and Arturo Vidal to step up if they are to beat the Colombians who have a very good attack themselves with frontman Radamel Falcao leading the line alongside James Rodríguez and Luis Muriel to provide for him.

Uruguay will be clear favourites against Peru who could struggle against the winners of Group C, Peru will be without their star player in Jefferson Farfán after he was ruled out of the rest of the tournament with an injury. Uruguay will have Lucas Torreira back after he was rested against Chile as he’ll walk into the star-studded line-up which includes Edinson Cavani, Luis Suarez and Diego Godin.

Brazil will also be favourites against Paraguay after they topped Group A, Paraguay will struggle even with 36-year-old Oscar Cardozo who has scored 1 goal so far in this tournament. However, Brazil’s quality should be too much for this Paraguay side as their world class names such as Casemiro and Roberto Firmino, who both played and scored in their 5-0 win over Peru. Argentina should also beat Venezuela as their leadership and experience should get them over the line along with a certain Lionel Messi. 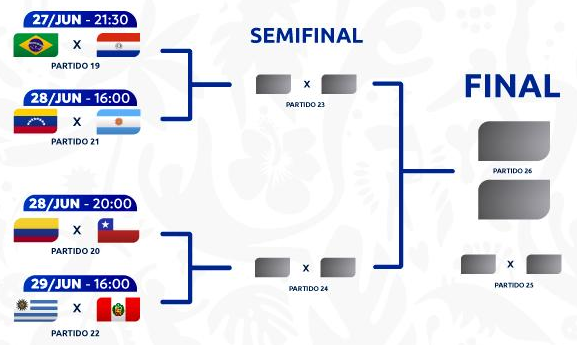