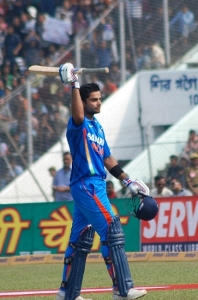 The captain of the Indian cricket national team was also named as the captain of the Test and ODI teams earlier that day. Kohli had a very exciting year and deserved all of the awards he received. Here are some of his impressive stats for 2018 – he scored 1322 runs and had an average of 55.08 in 13 Tests. He also gathered 1202 runs in 14 ODIs and had an impressive average of 133.55 whilst achieving six centuries.

Kohli, who came into the limelight during the ICC U19 World Cup that took place in Malaysia during 2008, ended the year being the highest ranked batsman in ODIs and Tests. He was also the top scorer in 2008 and was one of only three batsmen who scored more than 1000 runs in ODI. Kohli won both awards convincingly with Kagiso Rabada finishing second for Sir Garfield Sobers Trophy and the ICC Test Player of the Year prize. Rashid Khan won second place for the ICC ODI Player of the Year.

Kohli Himself was very proud and grateful for his achievement. He felt honoured to be recognized as the best cricket player in 2018 and was also pleased with his team’s performance. Here are his exact words: “To be rewarded in this manner from amongst all of them is obviously a very proud moment for me and something that gives you more motivation to keep repeating the same things because you have to keep the standard of cricket up and keep bringing in consistent performances. From that point of view, these awards give you that extra motivation.”

Kohli also received nice words from the ICC Chief Executive David Richardson, who said: “Sincere congratulations to every one of our individual winners and those players named in our ICC Test and ODI teams of the year. Special mention must go to Virat Kohli, who becomes the first ever player to win the Sir Garfield Sobers award along with Test Player of the Year and ODI Player of the Year and be named as captain of both teams.”

Who Were the Other Big Names?

If you are interested in cricket and you want to learn more about the sport make sure to read our dedicated page about this sport,there you will also find all the essential about cricket betting.