What Is the Monty Hall Math Problem?

The Monty Hall problem is one of those theories which could easily start an argument between punters once the subject is brought up.

There is no doubt that there is substance behind it, but when you take into consideration that even Professors in Mathematics are known to be spilt on its credibility, it should prove to you that the everyday punter may decide that it is something that they will not concern themselves with.

The Monty Hall problem is named after a US TV show from the 1960s where a game show host by the name of Monty Hall presents the contestants of the game with three doors, a goat stands behind two of the doors whilst a car can be found behind one of the other doors which will be theirs if they choose correctly.

The contestant obviously wants to choose the door which will reveal the car, and the Monty Hall problem focuses on the benefits in terms of value, of choosing one door and then changing your mind to choose another.

So, What Is the Solution to the Monty Hall Programme?

The contestant has chosen the first door, but Monty Hall asks for one of the other doors to be opened, behind which is a goat.

The contestant then has the option of sticking with their first choice of door or changing to the other door.

Most people consider that there is a little point behind in changing doors, but the solution to the Monty hall probability is that you should always change your decision to the other door. 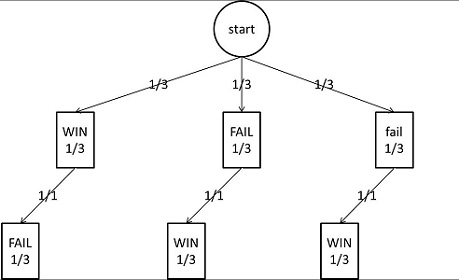 In an attempt to better describe this, let’s add some figures.

If there are three doors, each one has roughly a 33.3% chance of revealing the car with the other two having a combined chance of 66%.

The Monty Hall problem argues that if you decide to change your original choice of door, the odds of you winning will double from 33% to 66%.

If you are struggling to understand the reasoning behind this calculation, don’t worry too much about it because as already mentioned, even professors of Mathematics have been known to disagree about the reasoning behind it, but as with anything to do with value in betting, it is worth spending a little time trying to understand the Monty Hall problem but don’t beat yourself up if it goes straight over your head.

A tool which may help you out a little can be found if you Google ‘Monty hall problem simulation’.

This is really easy to use tool which will simulate the results of your choices relating to the doors that you choose and if there is one thing which makes the Monty hall probability easier to understand it is the Monty Hall problem simulation.

Most people learn more easily if something is actually worked out in front of them, and this is what the Monty hall problem simulation tool will do.

What If You Just Don’t Understand the Monty Hall Math Problem?

If you don’t understand the Monty hall math problem or just cannot come to terms with the Monty Hall paradox, it doesn’t really matter as long as you understand how important that value is in your betting and how it will increase your betting profits over the course of the long term.

The whole point of the Monty Hall problem is to identify the value in changing your choice of doors, but if you always look for the value in the bets that you place, you will be able to see the benefits in real life, in front of your own eyes.

As an example, if you can get odds of 2/1 on a selection which should be 6/4 you are getting value and if you continue to only bet on selections which give you value, there will be no doubt about it, you will be acting like a professional gambler who does not bet on anything and everything but instead, chooses the bets that they make carefully and wisely.

The vast majority of punters don’t even give value a second thought, their only aim is to get their bet on whatever the odds, they don’t even look at other sportsbooks to check if they are offering better odds.

Punters like this are literally throwing money down the drain.

It is just the same as someone coming up to you, in one hand he has a twenty-pound note, and in the other, he has a ten-pound note and tells you to choose which one you want, and you choose the ten-pound note.

Should You Concern Yourself with the Monty Hall Math Problem?

It would be a great idea to at least have a good look at the Monty hall math problem, but it is not the end of the world if you don’t.

There is a lot to be said for always trying to keep things simple so as long as you understand the basic concept of value which we have already spoken about, you won’t go far wrong and don’t forget, if you don’t understand the Monty Hall problem, you will be in good company because some of the most intelligent people out there have difficulty understanding it and would happily argue all day that it is a load of old rubbish!